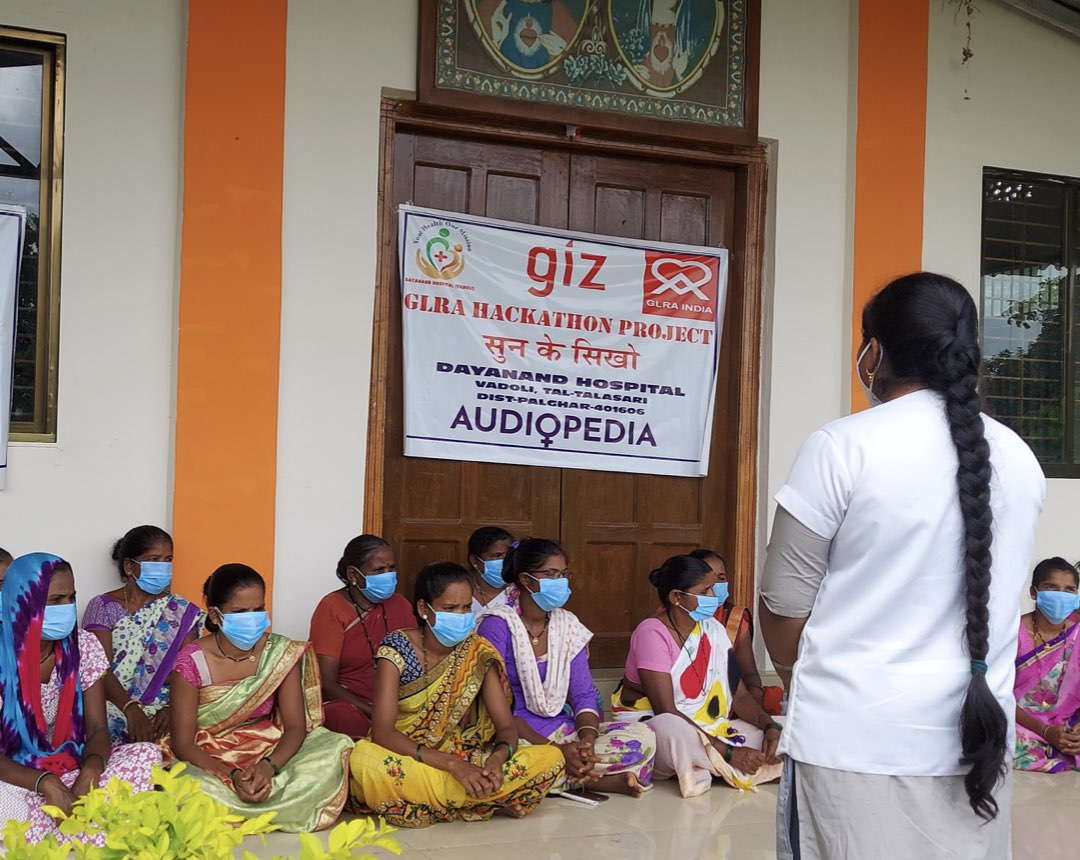 The project "Sun ke Seekho" (Listen and Learn) is using a customized version of the Audiopedia Web App to spread awareness in the targeted community in Maharashtra state. The awareness campaigns covers Leprosy, Covid, its prevention, and WASH practices. The use of the Audiopedia Web App is promoted by the Community Outreach Volunteers (COV) under the supportive supervision of Community Health Workers (CHWs) and the field coordinators (FCs) in the intervention sites. The results of the intervention sites will be compared with those of the conventional awareness campaigns in Omalur block, Chettipatti Tamil Nadu which will serve as a control site.

The project aims to reach a total of 300,000 populations indirectly in the intervention and the control sites put together. The K ward Mumbai slums and Talasari block of Palghar district, Maharashtra state are the intervention sites while the Omalur block of Chettipatti district, Tamil Nadu state will be a control site in this pilot project.

The project will approximately benefit the below populations through direct interactions during outreach activities:

The above populations will be directly sensitized through community meetings in presence of local panchayat leaders, village leaders or village health and sanitation committees, youth groups, and women self-help groups. The team of Community Health Workers (CHWs) along with Community Outreach Volunteers (COV) will reach out in target villages or urban locations and will sensitize community members directly which further will play a key role in spreading messages across the villages or slums. COVs in the villages and slums will enhance the reach within the targeted villages.

The COV and CHW will be chosen from the target community; preferably those who are influential and are socially active within the community. The candidates with a social service mindset, well-versed with mobile, internet, and social media, comfortable with public speaking in the local dialect, and those well accepted by the target community will be enrolled in the project at the intervention sites. However, knowledge of mobile phone use, social media like WhatsApp or the internet will not be the eligibility requirement of recruitment of the project staff in the control site.

The field coordinator (FC) at each project site will be selected from the local community, experienced in community mobilization, with good networking & public dealing skills. Government community outreach volunteers like ANM, ASHA, Anganwadi workers, local PHC staff, private health service providers and clinics in the target areas will be sensitized by the field coordinator.

The Audiopedia pilot is expected to enhance the awareness levels among the target community in the tribal pockets in Palghar and the slums of Mumbai, Maharashtra state. A study conducted during the year 2014-16 by GLRA India with the support of the Indian Council of Medical Research (ICMR) revealed significantly low awareness in Maharashtra about leprosy thereby leading to poor health-seeking behavior.

The study revealed about 58% of study participants suspected leprosy by a skin patch. Most (up to 82%) of the leprosy cases perceived leprosy patch ‘not a disease’ and ignored this sign. This led to delayed health-seeking behavior predisposing patients to complications like deformity, ulcers, etc. A median delay of about 12 months for seeking health advice at government PHC was noticed among the leprosy patients with visible deformity. The likelihood of correct diagnosis and treatment initiation is higher in a public health facility (Government sector).

However, the study revealed only 49% of the leprosy cases with deformity first sought medical advice at the government health facility. Alarmingly awareness level among the study population was very low. Only 24% of leprosy patients had comprehensive knowledge about leprosy and 49% of the respondents had never heard/seen/read about leprosy their diagnosis. This proportion was similar among controls too, up to 29%. Often qualified (up to 50%) and unqualified medical practitioners misdiagnosed leprosy that also added to delayed reporting of leprosy patients with a disability to the public health facility.

To address the gaps revealed by the above research, the Audiopedia pilot in the intervention sites will promote messages related to disease symptoms, a consequence of late detection, free treatment availability in government health facilities, and seeking medical advice early